Posted at 11:59h in How to Run a Business, Planning, Time Management, Travel by Helene Segura 0 Comments
0 Likes 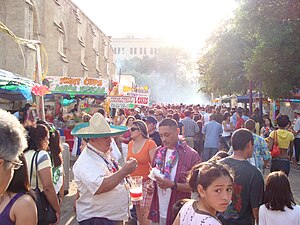 San Antonio has been partying like it’s 1999 since 1891, when a group of citizens decided to celebrate the heroes of the Battle of San Jacinto and the Alamo.

Fiesta has been occurring every April in San Antonio for over one hundred years. There are multiple events each day, as well as several parades over a ten-day period. Most of these events are fundraisers for various non-profits and scholarship programs around town. If you think about it, massive amounts of food and beverages are consumed all in the name of charity. San Antonio didn’t hold the title of America’s Fattest City for several years running for nothin’, and we do it for good causes! Virtually the entire city shuts down for 10 days to attend events around town.

You read that correctly. We pretty much shut down around here. The last Friday of Fiesta is a school and city holiday called Battle of Flowers. Many people use vacation days to set up for the events for which they’re volunteering. Many more people either call in sick to work or show up with hangovers and/or indigestion. Those who do arrive to work in satisfactory condition take longer breaks to discuss the events of the previous evening and plan for future adventures. It’s hard work partaking in these celebrations!

It’s a most unproductive time in this city.

How many other cities can have an absentee workforce for 10 days and still bounce back to normal? AND raise tens of thousands of dollars for charity at the same time? San Antonio was even named  the Nation’s Best Performing City by the Milken Institute in 2011. You might say that if we can slow or shut down nearly all operations while the rest of the world waits on us, we are pretty darn productive after all.

San Antonio can do this because we have systems in place, and we set expectations for this time period with all of our customers and clients. This is how we roll.

And so, too, can you roll with your own business. If a city can shut down for 10 days to party, you can take some much needed time off and go on vacation – even if it’s for only a quick weekend getaway.

Systems. Expectations. You can do it.